In this powerfully theatrical new opera , they will portray Tesla as the radical scientist, inventor, philosopher, prophet and mystic that he was.

His journey from poverty and obscurity to fame and fortune and back again. An inversion of the American Dream.

Congruent with his notion of the circularity and concurrence of time, the opera will be experimenting with time and space in the dramaturgy and music, reflecting his own understanding of the bends, shapes and repetitions of time itself.

The ambitious, contemporary opera focuses on the physicist and inventor Nikola Tesla and his rivalry with his fellow inventor and competitor Thomas Edison — two pioneers in the field of electrical engineering with opposed philosophies of life. Tesla was a radical, detail-obsessed genius, while Edison, although a great inventor himself, was also remove as a clever businessman and self-marketer.

Tesla represents radical, detail oriented genius and Edison a hugely talented inventor but also a shrewd business man and showman who was very much a paradigm of the Laissez Faire, ruthless free market of America at the time. Tesla believing that electricity and power should be free for the good of humanity, Edison seeing it as a source of immense personal wealth. A contemporary example of this polarity being Tim Berners-Lee, British founder of the World Wide Web as we know it today. He decided to give it to humanity free of charge, believing that it was for the good of all, not just his own wealth. 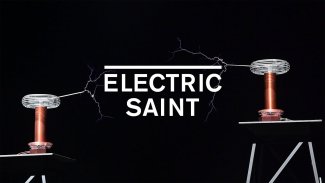 “With emphasis, downright mystical, it flashes and sizzles from wires and under light bulb shells from the projection screen. Hymnically wide eyes cheer with the voices, not getting enough of the euphoric certainty of the future ….. even when the alternating current saint Nikola Tesla (1856 – 1943) fell into economic and personal ruin, the audience was well supplied with musical reminiscences.”

“The laboratory scenes in which technical devices such as Tesla generators and spirals are opened and circuit projections are shown are particularly impressive. There is something playful about it and nothing of tabloid realism. Original moments could be experienced here when Tesla and Edison sing about the capacitor and carbon brush and the first law of thermodynamics is explained…..” 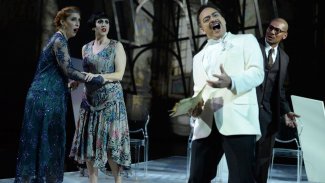 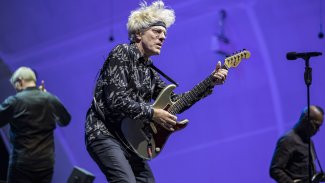