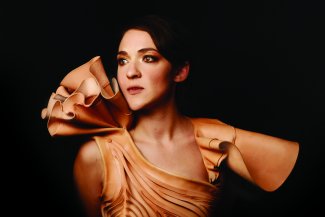 Becca Stevens has been awarded the Rising Star – Female Vocalist award in the Annual 65th Critics Poll by Downbeat Magazine. Downbeat says of Stevens: ​“Achieving this honour despite the absence of overt ​‘jazz singing’ in the albums released under her own name makes the accolade all the more impressive.”

Stevens said: ​“I see Jazz as a huge part of who I am and the roots of my experience in New York. But if I were to just say, ​‘I’m a Jazz musician,’ I wouldn’t be telling the truth”.

The Brooklyn based singer, composer and multi-instrumentalist draws in elements of pop, indie-rock, jazz, and traditional Appalachian folk and is hailed for her unique ability to craft exquisite compositions both for her own band, and for artists who run the gamut of genre. Stevens has collaborated with the likes of: David Crosby, Billy Childs, Brad Mehldau, Esperanza Spalding, Ambrose Akinmusire, Jacob Collier, Vijay Iyer and many others. Becca’s latest album Regina was released in March 2017, inspired by strong women and figures in literature, history, legend and her own life.